Thank you for supporting Keep Akron Beautiful (KAB), which has helped us continue to serve the Akron community with our mission of improving Akron’s quality of life through beautification and responsible environmental management. Your support helps with community improvement programming that includes public litter and graffiti removal, volunteer revitalization projects, crime reduction and prevention and the maintenance of community sponsored Flowerscapes. Keep Akron Beautiful brings out the best in what Akron has to offer for a lasting, positive impact on our region. It has been Keep Akron Beautiful’s pleasure to serve you this year through: 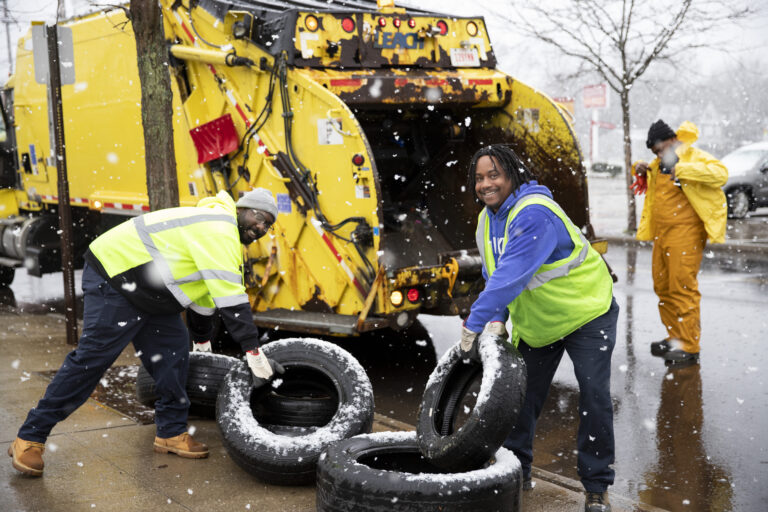 Removing Akron’s Litter/Clean Up Akron Month – In March of 2022, we put a spotlight on just how bad Akron’s litter really was and garnered the support needed to clean it up. After nine months, we have made considerable progress in the reduction of Akron’s litter. Thanks to 1,663 volunteers, who assisted in litter cleanups all over the city, and large cleanups throughout Clean Up Akron Month, we have made significant changes. During our community clean ups and Clean Up Akron Month combined, 3,125 volunteers removed almost 43.03 tons of trash and 595 tires from 44 sites, including 7 schools! In September of 2022, we completed our annual Community Appearance Index survey. This tool designed by Keep America Beautiful visually assesses the overall appearance of communities through indicators such as litter, illegal signs, and graffiti. A team of community, business, and government representatives conducted the visual analysis using a scoring system with choices ranging from 1-4, with “1” being minimal or no litter to “4” being extremely littered. The 2022 Litter Index for the City of Akron is rated 1.8. The Temporary Illegal Signage Index rated a 1.4, reflecting an average of fewer than 5 signs illegally placed on public land in any one ward and the Graffiti Index rated a 1.1. A 2 graffiti rating would mean 1-2 small tags per ward, no larger than 6 feet by 6 feet and could be cleaned up by 1-2 people. All ten wards scored extremely well, with the highest score being only 1.2. 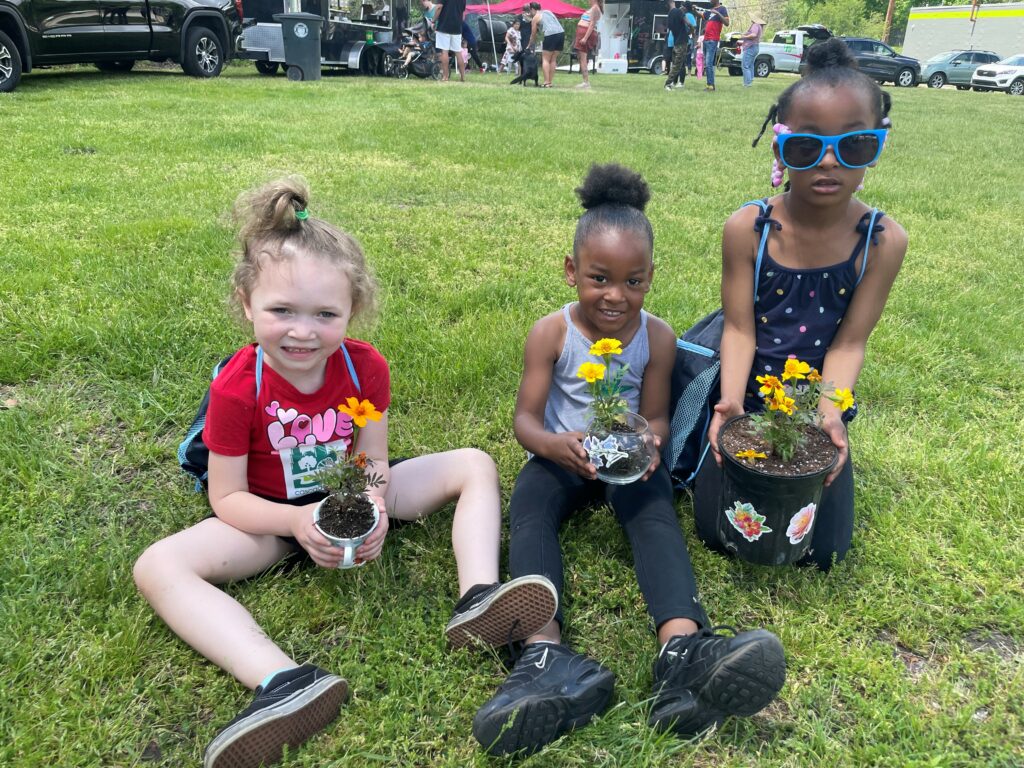 Cleaning up our City Parks – Keep Akron Beautiful led the charge of corporate volunteer projects with the City of Akron for the fourth annual Parks Week. From May 9-13, litter reduction, beautification and community improvement projects were completed in all ten wards of the City of Akron. KAB managed projects including mulching and planting at Alexander Park and power washing, beautification and mulching at Waters Park. Pictured to the left you will see three of our young friends who joined us at a Parks Week Celebration and learned how to properly pot a plant. Recycle Right Campaign – For twelve weeks, this summer, Keep Akron Beautiful worked alongside the City of Akron Sanitation & Recycling Division for year four of our recycling campaign, Recycle Right. In 2019, prior to this campaign, our contamination rate was at an all-time high of 39%, reduced now to 22.3% (2022). We are helping to keep food, liquid, and plastic bags out of Akron’s curbside carts. Helping children to adopt “green” habits at a younger age is an investment they will pass onto their parents, families, and friends.
Beautiful Blooms – A total of 20 professionally maintained Flowerscapes, 70 Great Streets Planters, and 71 volunteer Adopt-A-Sites helped to reduce purposeful littering, filter water, control runoff, encourage pollinators, reduce carbons, instill pride and provide us with positive mental health. KAB donated 26 gallons of Swiss Chard to the Haven of Rest, installed 20 Fall – inspired containers on Arlington Road in partnership with Great Streets, and helped design and install the new gardens at Jewett Park – the Akron Park’s Challenge winner for 2022. In our 20 sponsored gardens, we tried several new varieties. Helianthus ‘Saturn Sun’ proved to be a showstopper in our historic Matthew’s Hotel Garden pictured to the left, and at Akron Children’s Hospital. Pollinators flocked to these tiny sunflowers. Gomphocarpus physocarpus, commonly known as hairy ball milkweed, grew up to 3 feet tall in our office bed and on High Street, near The Akron Art Museum. The Flowerscape crew noticed many, many Monarch Caterpillars on our common, swamp, and butterfly milkweed. A welcomed affirmation that our efforts to restore ecology to the downtown area have been fruitful! 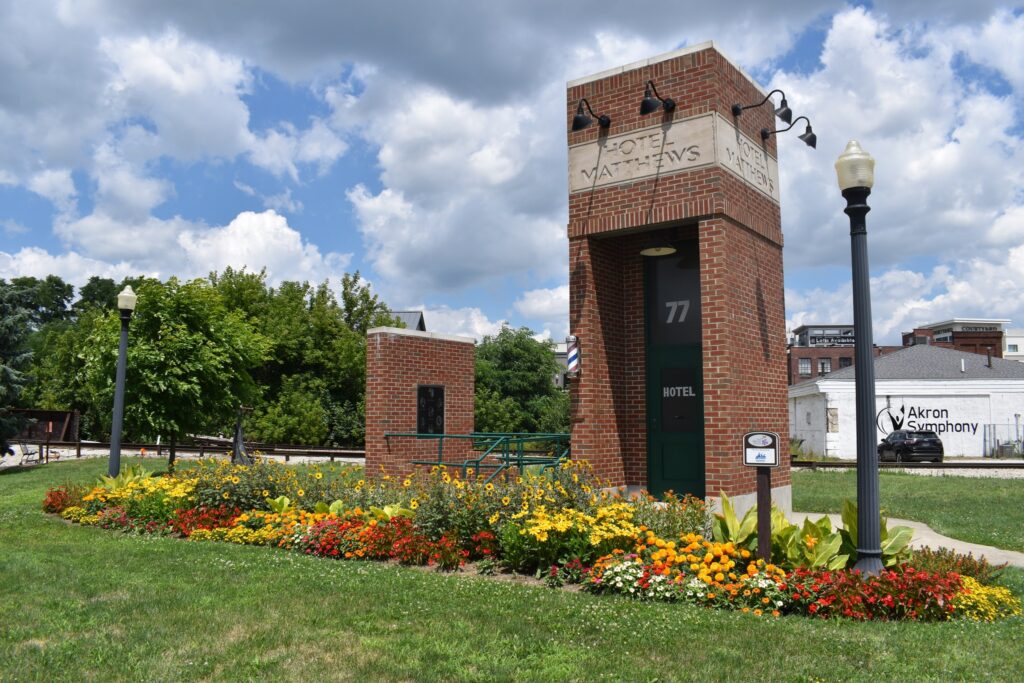 Beautification Watch Awards – Thanking property and business owners by sending Beautification Watch Awards, with 3,200 mailed this season for “standout” properties, though choosing has become a hard task for our 45 volunteer teams when so many properties show such great care! Beautification Projects – Our well-stocked Community Pride Trailer and Litter & Illegal Dump Cleanup Trailer are available to volunteer groups for public space enhancements, each year. As of October 3, 2022, 17 projects were completed utilizing the trailers, in all ten wards of the City of Akron. Here is a snapshot of the areas/groups the trailers served: Summit Lake Community Development Corporation, Reymann House, Kenmore Neighborhood Alliance, Glendale Steps, University of Akron Campus Cupboard, Firestone Park, City of Akron, and JoAnna House II. 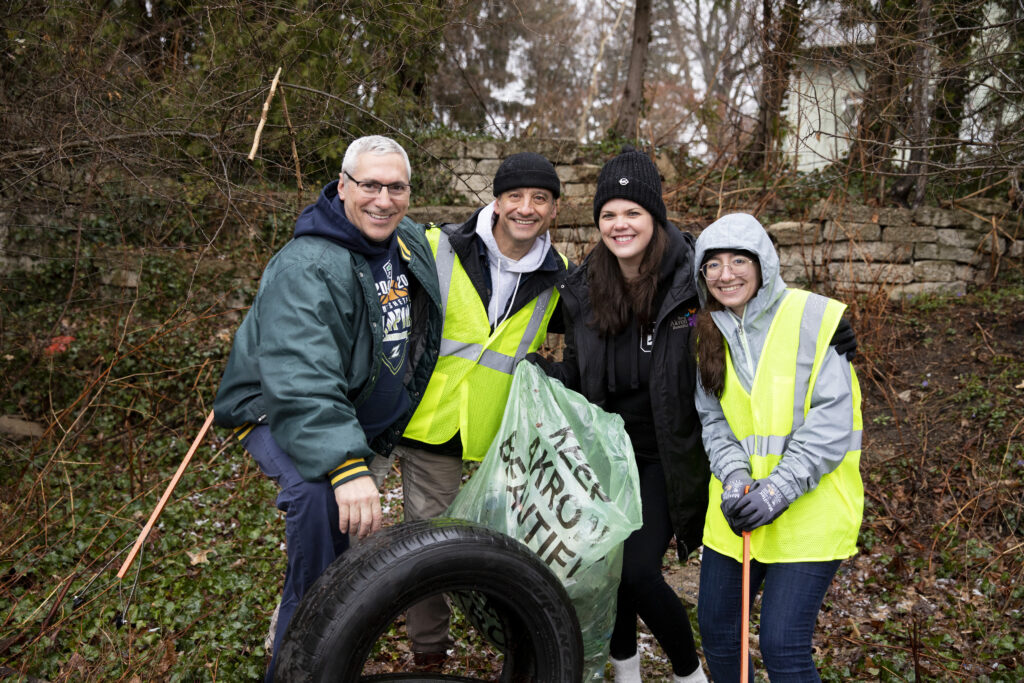 Daily Litter Cleanup – When you donate to Keep Akron Beautiful, we have you to thank for the litter-free public byways our litter crews can safely clean every day. As of November 1, 2022, 2,990 bags of litter were removed from city streets, expressways, parks, and roadsides, 62 illegal dumps were remediated, and 36 graffiti sites were abated. Keep Akron Beautiful takes pride in knowing the impact we have on our community. Did you know Keep Akron Beautiful is the only entity in Akron focused on picking up litter? We are short staffed just like everyone else and can use help with volunteer litter cleanups. If you are interested in volunteering, please check out our website at www.keepakronbeautiful.org or get in touch with Office Manager, Emma Segedy, at [email protected]. 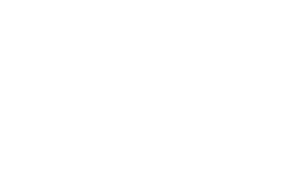